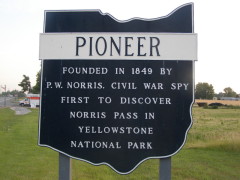 Earliest recorded settlers of Pioneer were P.W. Norris and Owen McCarty (brothers-in-law), who were hired to clear James A. Rogers land in 1842-3. That land was section 17 of Williams County. Pioneer is located today in 16, 17, 20 and 21.

In 1844 Silander Johnson and Family arrived and James Rogers and family soon after P.W. Norris traveled to Fayette to claim Jane Cottrill as his bride - slashing a trail to bring her to Pioneer. In 1848, G.R. Joy moved to Pioneer from Morenci, Michigan after buying 160 acres on the west edge of the small village. He had built the first house in Morenci and remarked that there were only four houses between Pioneer and Bryan. In January of 1849, Samuel Doolittle built a house in section 21. He was followed in the spring of 1850 by his father, Ebenizer Doolittle and Benson Doolittle (Brother).

The 1850 census counted 222 people living in the village of Pioneer. Many of those families are still represented. The first child born in Pioneer was either Mirelia Norris b. 1844 or Jacob Dohm. There is no record available to verify who holds that honor. Some of the local names from the 1850 census still represented in the area are Snow, Dohm, Drake, Coulon, Stiving, Rogers, Doriot, Poorman, Johnson, Bailey, Sweetman, Loomis, Young, Evers, Fenicle, Shaffer, Yoder, Durbin, Shankster, Orewiler, Dick, Fisher, Sheets (Sheats), Norris and McCarty. Other pre-1860 families included Dr. Richard Gaudern, Olin Kenyon, Warren Fulton, Jasper Best, C. VanOrsdale, Andy Irvin, Cummins and Cainfield.

Early business was spurred by the real rivalry between P.W. Norris and G.R. Joy, who were married to the Cottrell sisters. Each actively sought to make his parto f town more prosperous. P.W. managed to b e named postmaster in 1850, but could not name the town after himself, so he named it Pioneer. Pioneer was laid out into streets in 1853.

P.W. got Andy Irwin to build the Pioneer Hotel on the north side in 1854. Not to be outdone, G.R. Joy erected the Joy Hotel on the south side of the creek the following year. That building still stands next to the Laundromat mid-block of second block of First street. 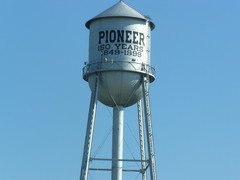 Both men were ambitious businessmen, a trait that is still prevalent among the citizens of modern day Pioneer. Mr. Norris built a grist mill and saw mill along the north side of the creek. Later he had a brick yard nearby (where the "Mill Diamond" is today). Mr. Norris was a land agent and partner in a dry goods store, besides being postmaster. Later he explored Yellowstone National Park. Several sites there bear his name. G.R. Joy bred horses and cattle, built a sawmill, loaned money and bought property all around the growing village. Mr. Norris finally moved away to north of Detroit where he named a village "Norris". It now has been incorporated into Warren, Michigan.

G.R. Joy spent the remainder of his life in Pioneer and has descendants still living here today. School has been an important part of Pioneer since very early on. In 1844 school was held in Silander Johnson's cabin, with teacher Miss Rachel Baker of Amboy teaching a summer term. The first frame school was built near the old burying ground in 1847. That sight is near the water tower of today. A four room, 2 story frame school was built half way between State and Cedar facing Scott street, on the north side of town. In 1860, a fifth school, a large brick many-roomed school was built behind the four room school. This building stood until the 1970's. The last school sire on Baubice Street was chosen in 1920 and has been expanded several times since.

The Toledo and Western Railway came to Pioneer on its way to Columbia, Ohio in 1903. It never went any further, although the right of way had been purchased. The train had a yard engine and a traveling engine. All kinds of business prospered as a result of rapid delivery to Toledo, Ohio. Pioneer had a good wool market, pickle vats, stockyards, flour mill, grist mill, hoop mill and most were located along the south side of the creek in an area that now has a parking lot, bank and behind the fire hall. An old rail bridge abutment still exists where rails went to grist mill and brick yards and other businesses on that side of the creek. The rails ran across State street and down West Church street, where switching direction of the train took place. Many people remember the old "teeter and wobble" and a book was even written about it. Excursions to Fayette, Adrian, Walbridge Park and the zoo in Toledo, and into downtown Toledo for shopping and movies were common. The train met other lines that were traveling north and south.

Mr. Earl Snyder, a local hardware store co-owner, tried desperately to get the railroad up and going again after the T&W abruptly stopped service during the depression. He ended up being owner/operator and was featured in Ripley's "Believe It or Not" column and museum and was also featured on a television spot. The railroad continued until 1954, when Mr. Snyder sold the trucks he had traded for the iron rails to his son in-law John Yeager and partner, Richard Repp. Mr. Repp used the Pioneer and Fayette Railroad for his trucking company until recent years. 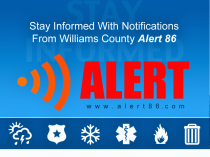